An Elegy for Easterly: Stories 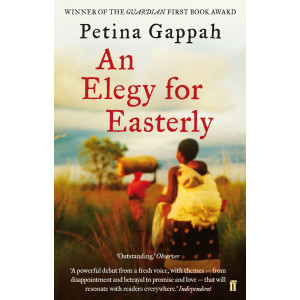 An Elegy for Easterly: Stories

A woman in a township in Zimbabwe is surrounded by throngs of dusty children but longs for a baby of her own; an old man finds that his new job making coffins at No Matter Funeral Parlor brings unexpected riches; a politician’s widow stands quietly by at her husband’s funeral, watching his colleagues bury an empty casket.

Petina Gappah’s characters may have ordinary hopes and dreams, but they are living in a world where a loaf of bread costs half a million dollars, where wives can’t trust even their husbands for fear of AIDS, and where people know exactly what will be printed in the one and only daily newspaper because the news is always, always good.

In her spirited debut collection, the Zimbabwean writer Petina Gappah brings us the resilience and inventiveness of the people who struggle to live under Robert Mugabe’s regime. She takes us across the city of Harare, from the townships beset by power cuts to the manicured lawns of privilege and corruption, where wealthy husbands keep their first wives in the “big houses” while their unofficial second wives wait in the “small houses,” hoping for a promotion.

Despite their circumstances, the characters in An Elegy for Easterly are more than victims―they are all too human, with as much capacity to inflict pain as to endure it. They struggle with the larger issues common to all people everywhere: failed promises, unfulfilled dreams, and the yearning for something to anchor them to life.

Be the first to review “An Elegy for Easterly: Stories” Cancel reply

What It Means When A Man Falls From the Sky