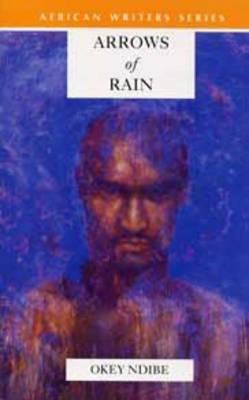 In the country of Madia (based in part on Ndibe’s native Nigeria) a young prostitute runs into the sea and drowns. The last man who spoke to her, the “madman” Bukuru, is asked to account for her last moments. When his testimony implicates the Madian armed forces, Bukuru is arrested and charged with her death.

At the first day of trial, Bukuru, acting as his own attorney, counters these charges with allegations of his own, speaking not only of government complicity in a series of violent assaults and killings, but telling the court that the president of Madia himself is guilty of rape and murder. The incident is hushed up, and Bukuru is sent back to prison, where he will likely meet his end. But a young journalist manages to visit him, and together they journey through decades of history that illuminate Bukuru’s life, and that of the entire nation.

A brave and powerful work of fiction, Arrows of Rain is a brilliant dramatization of the complex factors behind the near-collapse of a nation from one of the most exciting novelists writing today.

Okechukwu Ndibe, better known as Okey Ndibe, (born 1960) is a novelist, political columnist and essayist of Igbo ethnicity. Ndibe was born in Yola, Nigeria. He is the author of Arrows of Rain and Foreign Gods, Inc., two critically acclaimed novels published in 2000 and 2014 respectively.

Be the first to review “Arrows of Rain” Cancel reply