Log In
View cart “In the House of the Interpreter” has been added to your cart.

Down These Mean Streets 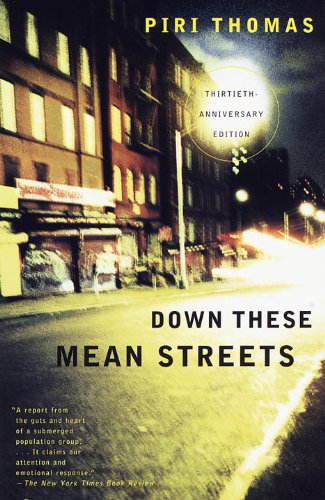 Down These Mean Streets

Thirty years ago, Piri Thomas made literary history with this lacerating, lyrical memoir of his coming of age on the streets of Spanish Harlem.

Here was the testament of a born outsider: a Puerto Rican in English-speaking America; a dark-skinned morenito in a family that refused to acknowledge its African blood. Here was an unsparing document of Thomas’s plunge into the deadly consolations of drugs, street fighting, and armed robbery — a descent that ended when the twenty-two-year-old Piri was sent to prison for shooting a cop.

As he recounts the journey that took him from adolescence in El Barrio to a lock-up in Sing Sing to the freedom that comes of self-acceptance, faith, and inner confidence, Piri Thomas gives us a book that is as exultant as it is harrowing, and whose every page bears the irrepressible rhythm of its author’s voice.

Thirty years after its first appearance, this classic of manhood, marginalization, survival, and transcendence is available in an anniversary edition with a new Introduction by the author.

Be the first to review “Down These Mean Streets” Cancel reply