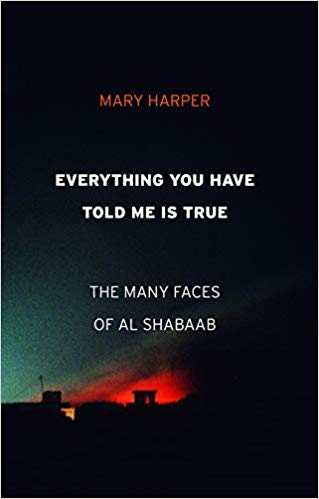 Al Shabaab is one of the century’s most successful violent jihadist movements. It has governing power, ruling over millions of Somalis and vast swathes of territory, and kinetic power, committing spectacular acts of violence. But what lies behind the headlines and the bloodshed? Who are Al Shabaab, and why do people join? How does this organisation govern, educate and indoctrinate?

Reporting on Somalia for twenty-five years, Mary Harper has gained extraordinary access to members of Al Shabaab–and, disturbingly, they in turn have access to her. In this engrossing book, she paints the complex picture of life for ordinary people in the group’s shadow–stories of tremendous loss, unbearable compromise, and unexpected profit. She reveals a resilient movement with many faces, and discovers that it can be difficult to know where Al Shabaab begins, and where it ends.

Mary Harper is the Africa Editor at BBC World Service News. She has reported on Africa for the BBC for two decades, and has a special interest in the Horn of Africa, especially Somalia, where she spends much of her time.

Be the first to review “Everything You Have Told Me Is True: The Many Faces of Al Shabaab” Cancel reply

Feminist Theory: From Margin to Center

These Bones Will Rise Again

Feminism is for Everybody