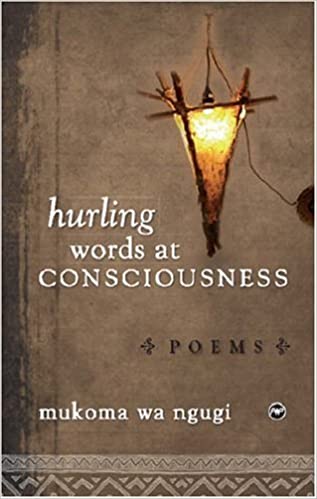 “By turns soothingly tender or implacably harsh, Hurling Words at Consciousness is an unflinching meditation on our globalized inequities. It is thoughtful and richly rewarding.” –Tejumola Olaniyan, University of Wisconsin-Madison

“Mukoma wa Ngugi is a poet of extraordinary expressive gifts. This impressive volume casts a critical yet forgiving eye on closely-observed episodes from life in the United States, with knowing glances towards poets as diverse as Le’opold Se’dar Senghor and Matthew Arnold. The social concerns of an African poet in sympathy with political struggles throughout the Third World here jostle up against and defamiliarize the details of North American everyday life, which then suddenly take on new significance.” –Nicholas Brown, University of Illinois at Chicago

“While treating the reader to an expansive range of themes – death, war, life, love, nature, human relationships/encounters, personal reflections, art, politics, history, social justice, revolution and others – Mukoma wa Ngugi also succeeds in making a deeply profound, artistic statement. He decorates his intensely reflective utterance with a lacework of images, metaphors and other forms of figurative expression that reveal a keen artist at his craft. With this first volume of poetry, Mukoma wa Ngugi has clearly entered the world of published poets in style!” –Micere Mugo Githae, Syracuse University

Mukoma Wa Ngugi is a novelist and poet, whose books include the novel Nairobi Heat and the poetry collection Hurling Words at Consciousness. He was short listed for the Caine Prize for African writing in 2009, and for the 2010 Penguin Prize for African Writing.

His columns have appeared in the Guardian, International Herald Tribune, and the Los Angeles Times, and he has been a guest on Democracy Now, Al Jazeera, and the BBC World Service. His stories and poetry have been published in the Kenyon Review, Kwani!, Chimurenga and Tin House Magazine, among other places.

Mukoma was born in 1971 in Evanston, Illinois and grew up in Kenya before returning to the United States for his undergraduate and graduate education. He is currently a professor of English at Cornell University.

Be the first to review “Hurling Words at Consciousness” Cancel reply

The Souls of Black Folk