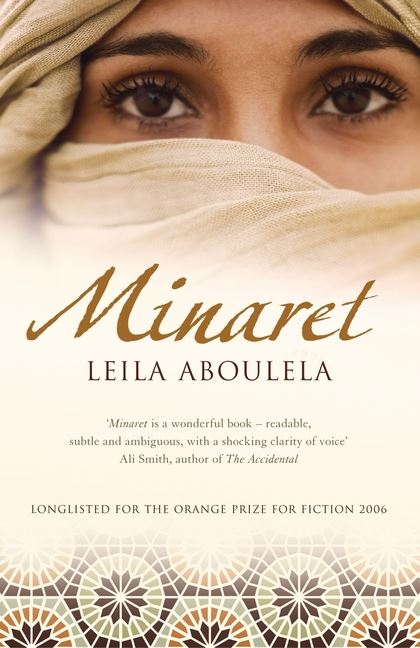 Leila Aboulela’s American debut is a provocative, timely, and engaging novel about a young Muslim woman — once privileged and secular in her native land and now impoverished in London — gradually embracing her orthodox faith.

With her Muslim hijab and down-turned gaze, Najwa is invisible to most eyes, especially to the rich families whose houses she cleans in London. Twenty years ago, Najwa, then at university in Khartoum, would never have imagined that one day she would be a maid. An upper-class Westernized Sudanese, her dreams were to marry well and raise a family. But a coup forces the young woman and her family into political exile in London.

Soon orphaned, she finds solace and companionship within the Muslim community. Then Najwa meets Tamer, the intense, lonely younger brother of her employer. They find a common bond in faith and slowly, silently, begin to fall in love.

Written with directness and force, Minaret is a lyric and insightful novel about Islam and an alluring glimpse into a culture Westerners are only just beginning to understand.

Leila Aboulela (born 1964) is a Sudanese writer who lives in Great Britain and writes in English. Her most recent books are the novel Bird Summons (2019) and the short-story collection Elsewhere, Home which was the winner of the 2018 Saltire Fiction Book of the Year Award. Her novel The Kindness of Enemies (2015), was inspired by the life of Imam Shamil, who united the tribes of the Caucasus to fight against Russian Imperial expansion. Aboulela's 2011 novel, Lyrics Alley, was Fiction Winner of the Scottish Book Awards and short-listed for a Regional Commonwealth Writers Prize. She is also the author of the novels The Translator (a New York Times 100 Notable Book of the Year) and Minaret. All three novels were long-listed for the Orange Prize and the IMPAC Dublin Award. Leila Aboulela won the Caine Prize for African Writing for her short story "The Museum", included in the collection Coloured Lights, which went on to be short-listed for the Macmillan/Silver PEN award. Aboulela's work has been translated into 15 languages and included in publications such as Harper's Magazine, Granta, The Washington Post and The Guardian.

Be the first to review “Minaret” Cancel reply