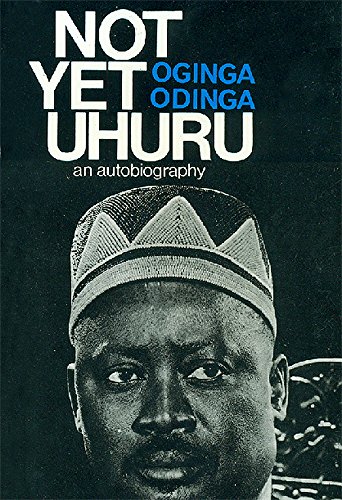 Not Yet Uhuru gives a vivid and authoritative account of the history of Kenya. In this autobiography, the author counters the Imperial British propaganda machine to distort the history of a nation. From the perspective of a man who was at the centre of the liberation struggle and the making of a new nation, Jaramogi Oginga Odinga deconstructs the fallacious and sloppy historical narratives peddled by propagandists, which are deliberately tailored to vilify the true national heroes and exalt villains.

In this seminal literary work, Jaramogi lets his betrayal by Jomo Kenyatta off his chest. He lays bare his frustration with Kenyatta’s turn against fellow Kapenguria six members such as Bildad Kaggia into his primary casualties and enemies. Jaramogi accuses Kenyatta of becoming an Imperial Master stooge and thus justifies his decision to break ranks with the Kenyatta regime. In light of the nationalism spirit, vision, and mission, Jaramogi considered Kenyatta’s change of heart an unforgivable grand betrayal. Not Yet Uhuru is not an ordinary autobiography. It is Jaramogi’s historical gift to Kenyans, Africa in general, and historians the world over. This book is filled with prophetic anecdotes and laden with premonitions, which can stir us from our self-induced political stupor. Not Yet Uhuru demystifies the Kenyatta and Odinga families’ political feud, which has played out for over five decades. This book will help you understand why the sons of the two founding fathers of Kenyan continue to strive to outwit each other in the political arena.

Be the first to review “Not Yet Uhuru” Cancel reply

Birth of a Dream Weaver: A Writer’s Awakening