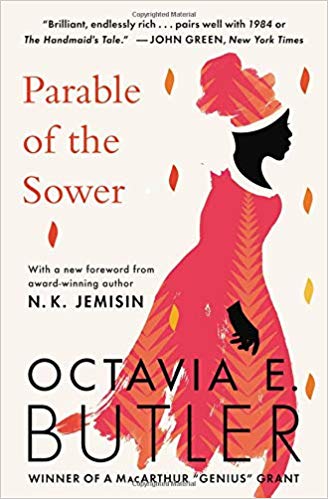 When unattended environmental and economic crises lead to social chaos, not even gated communities are safe. In a night of fire and death, Lauren Olamina, an empath and the daughter of a minister, loses her family and home and ventures out into the unprotected American landscape. But what begins as a flight for survival soon leads to something much more: a startling vision of human destiny…and the birth of a new faith, as Lauren becomes a prophet carrying the hope of a new world and a revoltionary idea christened “Earthseed”.

Octavia Estelle Butler, often referred to as the "grand dame of science fiction," was born in Pasadena, California on June 22, 1947. She received an Associate of Arts degree in 1968 from Pasadena Community College, and also attended California State University in Los Angeles and the University of California, Los Angeles. During 1969 and 1970, she studied at the Screenwriter's Guild Open Door Program and the Clarion Science Fiction Writers' Workshop, where she took a class with science fiction master Harlan Ellison (who later became her mentor), and which led to Butler selling her first science fiction stories.

Butler's first story, "Crossover," was published in the 1971 Clarion anthology. Patternmaster, her first novel and the first title of her five-volume Patternist series, was published in 1976, followed by Mind of My Mind in 1977. Others in the series include Survivor (1978), Wild Seed (1980), which won the James Tiptree Award, and Clay's Ark (1984).

With the publication of Kindred in 1979, Butler was able to support herself writing full time. She won the Hugo Award in 1984 for her short story, "Speech Sounds," and in 1985, Butler's novelette "Bloodchild" won a Hugo Award, a Nebula Award, the Locus Award, and an award for best novelette from Science Fiction Chronicle.

Other books by Octavia E. Butler include the Xenogenesis trilogy: Dawn (1987), Adulthood Rites (1988) and Imago (1989), and a short story collection, Bloodchild and Other Stories (1995). Parable of the Sower (1993), the first of her Earthseed series, was a finalist for the Nebula Award as well as a New York Times Notable Book of the Year. The book's sequel, Parable of the Talents (1998), won a Nebula Award.

In 1995 Butler was awarded a prestigious MacArthur Foundation fellowship.

Be the first to review “Parable of the Sower” Cancel reply

Parable of the Talents