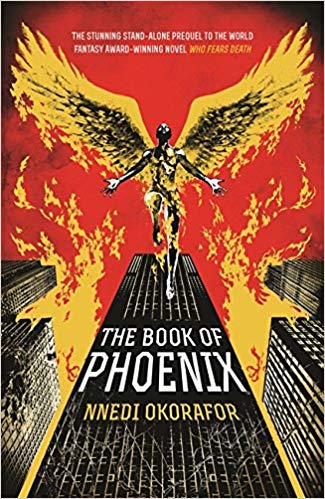 Phoenix was grown and raised among other genetic experiments in New York’s Tower 7. She is an “accelerated woman”—only two years old but with the body and mind of an adult, Phoenix’s abilities far exceed those of a normal human. Still innocent and inexperienced in the ways of the world, she is content living in her room speed reading e-books, running on her treadmill, and basking in the love of Saeed, another biologically altered human of Tower 7.

Then one evening, Saeed witnesses something so terrible that he takes his own life. Devastated by his death and Tower 7’s refusal to answer her questions, Phoenix finally begins to realize that her home is really her prison, and she becomes desperate to escape. But Phoenix’s escape, and her destruction of Tower 7, is just the beginning of her story. Before her story ends, Phoenix will travel from the United States to Africa and back, changing the entire course of humanity’s future.

Nnedi Okorafor's books include Lagoon (a British Science Fiction Association Award finalist for Best Novel), Who Fears Death (a World Fantasy Award winner for Best Novel), Kabu Kabu (a Publisher's Weekly Best Book for Fall 2013), Akata Witch (an Amazon.com Best Book of the Year), Zahrah the Windseeker (winner of the Wole Soyinka Prize for African Literature), and The Shadow Speaker (a CBS Parallax Award winner). Her adult novel The Book of Phoenix (prequel to Who Fears Death) was released in May 2015; the New York Times called it a "triumph". Her novella Binti will be released in late September 2015 and her young adult novel Akata Witch 2: Breaking Kola will be released in 2016.

Nnedi holds a PhD in literature/creative writing and is an associate professor at the University at Buffalo, New York (SUNY). She splits her time between Buffalo and Chicago with her daughter Anyaugo and family.

Be the first to review “The Book of Phoenix” Cancel reply