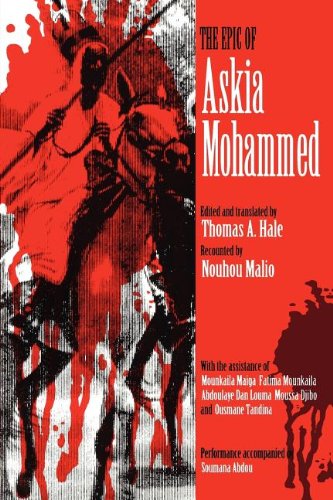 Askia Mohammed is the most famous leader in the history of the Songhay Empire, which reached its apogee during his reign in 1493-1528.

Songhay, approximately halfway between the present-day cities of Timbuktu in Mali and Niamey in Niger, became a political force beginning in 1463, under the leadership of Sonni Ali Ber. By the time of his death in 1492, the foundation had been laid for the development under Askia Mohammed of a complex system of administration, a well-equipped army and navy, and a network of large government-owned farms.

The present rendition of the epic was narrated by the griot (or jesere) Nouhou Malio over two evenings in Saga, a small town on the Niger River, two miles downstream from Niamey. The text is a word-for-word translation from Nouhou Malio’s oral performance.

By the Time She Returned