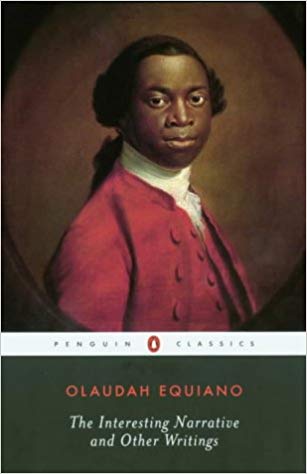 An exciting and often terrifying adventure story, and a precursor to the famous nineteenth-century slave narratives, Equiano’s The Interesting Narrative recounts his kidnapping in Africa aged ten, his service as a slave of an officer in the British Navy for ten years, and his life after he bought his freedom in 1766, growing to become one of the foremost figures of the anti-slavery movement in Britain.

The Interesting Narrative is a spirited autobiography, a tale of spiritual quest and fulfillment and a sophisticated treatise on religion, politics and economics.

Olaudah Equiano (c. 1745 – 31 March 1797), known for most of his life as Gustavus Vassa, was a writer and abolitionist from, according to his memoir, the Eboe region of the Kingdom of Benin (today southern Nigeria). Enslaved as a child, he was taken to the Caribbean and sold as a slave to a Royal Navy officer. He was sold twice more but purchased his freedom in 1766.

As a freedman in London, Equiano supported the British abolitionist movement. He was part of the Sons of Africa, an abolitionist group composed of Africans living in Britain, and he was active among leaders of the anti-slave trade movement in the 1780s. He published his autobiography, The Interesting Narrative of the Life of Olaudah Equiano (1789), which depicted the horrors of slavery. It went through nine editions in his lifetime and helped gain passage of the British Slave Trade Act 1807, which abolished the slave trade. Equiano married an English woman named Susannah Cullen in 1792 and they had two daughters. He died in 1797 in Westminster.

Wrestling with the Devil: A Prison Memoir