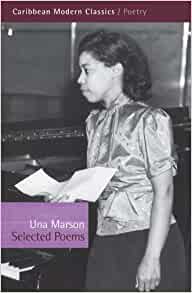 Una Marson is widely recognised as the earliest female poet of significance to emerge in West Indian literature , but whilst her role as an early feminist and a first woman publisher, broadcaster, pan-Africanist and anti-racist features on many web pages, her poetry has received less considered critical attention.

This may be because her work is very diverse, even seemingly contradictory. She is a Jamaican poet who pioneered the articulation of gender and racial oppression, brought Jamaican vernacular voices alongside a Wordsworthian passion for nature, and ventured to give subjectivity to the powerless and marginalised. Author of Afro-blues that draw on both African-American and Jamaican speech, and of folk monologues, she also wrote devotional sonnets and love lyrics within a distinctly un-modernist tradition. Marson’s work as presented here is a complex subject, striving to answer the questions of how to write as a woman; as a black, modern, diasporic subject; for the poor and powerless.

As Donnell’s extensive selection shows, and her introduction argues, Marson’s is a significant poetic achievement.

She travelled to London in 1932 and became the first black woman to be employed by the BBC during World War II. In 1942 she became producer of the programme Calling the West Indies, turning it into Caribbean Voices, which became an important forum for Caribbean literary work.

Be the first to review “The Una Marson: Selected Poems” Cancel reply

Carrying Knowledge Up a Palm Tree