They Poured Fire On Us from the Sky 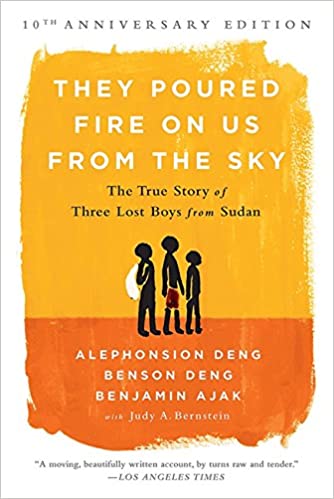 They Poured Fire On Us from the Sky

The inspiring story of three young Sudanese boys who were driven from their homes by civil war and began an epic odyssey of survival, facing life-threatening perils, ultimately finding their way to a new life in America.

Between 1987 and 1989, Alepho, Benjamin, and Benson, like tens of thousands of young boys, took flight from the massacres of Sudan’s civil war. They became known as the Lost Boys. With little more than the clothes on their backs, sometimes not even that, they streamed out over Sudan in search of refuge. Their journey led them first to Ethiopia and then, driven back into Sudan, toward Kenya. They walked nearly one thousand miles, sustained only by the sheer will to live.

They Poured Fire on Us from the Sky is the three boys’ account of that unimaginable journey. With the candor and the purity of their child’s-eye-vision, Alephonsian, Benjamin, and Benson recall by turns: how they endured the hunger and strength-sapping illnesses-dysentery, malaria, and yellow fever; how they dodged the life-threatening predators-lions, snakes, crocodiles and soldiers alike-that dogged their footsteps; and how they grappled with a war that threatened continually to overwhelm them. Their story is a lyrical, captivating, timeless portrait of a childhood hurled into wartime and how they had the good fortune and belief in themselves to survive.

Alephonsion Deng is a South Sudanese author and speaker. He is best known as the co-author of the book They Poured Fire on Us From the Sky: The True Story of Three Lost Boys of Sudan, along with his brother Benson, cousin Benjamin and American author Judy A. Bernstein.