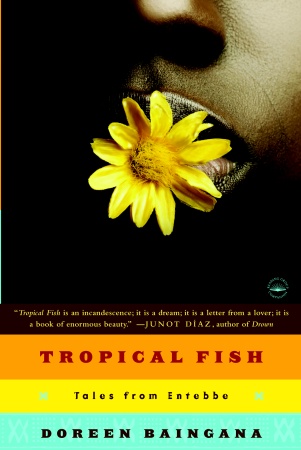 In her fiction debut, Doreen Baingana follows a Ugandan girl as she navigates the uncertain terrain of adolescence. Set mostly in pastoral Entebbe with stops in the cities Kampala and Los Angeles, Tropical Fish depicts the reality of life for Christine Mugisha and her family after Idi Amin’s dictatorship.

Three of the eight chapters are told from the point of view of Christine’s two older sisters, Patti, a born-again Christian who finds herself starving at her boarding school, and Rosa, a free spirit who tries to “magically” seduce one of her teachers. But the star of Tropical Fish is Christine, whom we accompany from her first wobbly steps in high heels, to her encounters with the first-world conveniences and alienation of America, to her return home to Uganda.

As the Mugishas cope with Uganda’s collapsing infrastructure, they also contend with the universal themes of family cohesion, sex and relationships, disease, betrayal, and spirituality. Anyone dipping into Baingana’s incandescent, widely acclaimed novel will enjoy their immersion in the world of this talented newcomer.

Doreen Baingana is a Ugandan short story writer and editor. Her book Tropical Fish won the 2006 Commonwealth Writers' Prize, best first book, Africa Region, and the AWP Award for Short Fiction (US). She won a Washington Independent Writers Fiction Prize and has twice been a finalist for the Caine Prize for African Writing. She was managing Editor at Story Moja, and was one of the 2013 Commonwealth Short Story Prize judges. She gave a talk for TED 2013 about "The role of offensive language in novels". Baingana's work has appeared in many journals and publications, including the African American Review, Callaloo, The Guardian, and elsewhere.

Be the first to review “Tropical Fish” Cancel reply