We Won’t Budge: An African Exile in the World 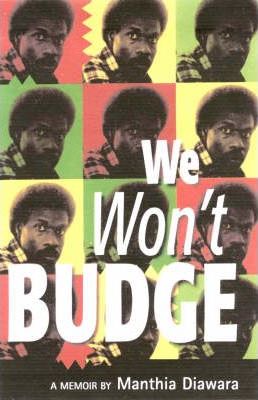 We Won’t Budge: An African Exile in the World

Thirty years after leaving his native Mali, Manthia Diawara has a home in New York City, and more than a few acclaimed publications to his name. Still, he cannot shake the memories of his birth country-or of his first place of self-imposed exile: the heady streets of 1960s Paris.

In this bittersweet memoir, Diawara recounts a year spent looking at how the assimilation process shapes the lives and dreams of immigrants everywhere. From the nightclubs of Bamako, to the cafes of Boulevard Montparnasse, to the black neighborhoods of 1970s Washington, D.C., this important and original book shatters many cherished notions about experiencing race in the world today. At turns humorous and harrowing, beautifully written and shrewdly argued, it offers an unsentimental view of African traditions at the same time that it confronts America’s most deeply ingrained prejudices.

Manthia Diawara (born December 19, 1953) is a Malian writer, filmmaker, cultural theorist, scholar, and art historian. He holds the title of University Professor at New York University (NYU), where he is Director of the Institute of Afro-American Affairs.

Be the first to review “We Won’t Budge: An African Exile in the World” Cancel reply