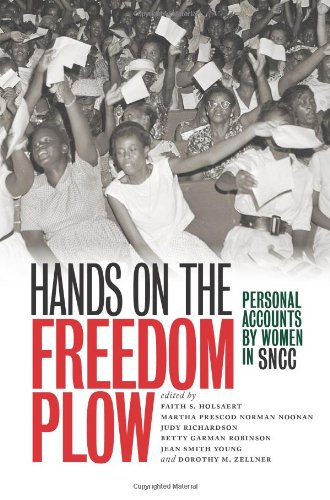 In Hands on the Freedom Plow, fifty-two women — northern and southern, young and old, urban and rural, black, white, and Latina — share their courageous personal stories of working for the Student Non-violent Coordinating Committee (SNCC) on the front lines of the Civil Rights Movement.

The testimonies gathered here present a sweeping personal history of SNCC: early sit-ins, voter registration campaigns, and Freedom Rides; the 1963 March on Washington, the Mississippi Freedom Summer, and the Movements in Alabama and Maryland; and Black Power and anti-war activism.

Since the women spent time in the Deep South, many also describe risking their lives through beatings and arrests and witnessing unspeakable violence. These intense stories depict women, many very young, dealing with extreme fear and finding the remarkable strength to survive.

The women in SNCC acquired new skills, experienced personal growth, sustained one another, and even had fun in the midst of serious struggle. Readers are privy to their analyses of the Movement — its tactics, strategies, and underlying philosophies. The contributors revisit central debates of the struggle including the role of non-violence and self-defense, the role of white people in a black-led movement, and the role of women within the Movement and the society at large.

Each story reveals how the struggle for social change was formed, supported, and maintained by the women who kept their “hands on the freedom plow.”

Faith Holsaert (born 1943) is an American educator and activist during the Civil Rights Movement.

As a white, woman activist of organizations and movements such as SNCC (student nonviolent coordinating committee), women's rights, LGBT community, Faith has come across several hardships throughout the course of her life and is still seen to be very active in the community. She has a collection of letters and papers written, documenting her experiences and actions as an activist, called the "Faith Holsaert Papers".

Be the first to review “Hands on the Freedom Plow: Personal Accounts by Women in SNCC” Cancel reply